Traffic opening at the Quang Trung Bridge, remove the "bottleneck" about the city traffic congestion 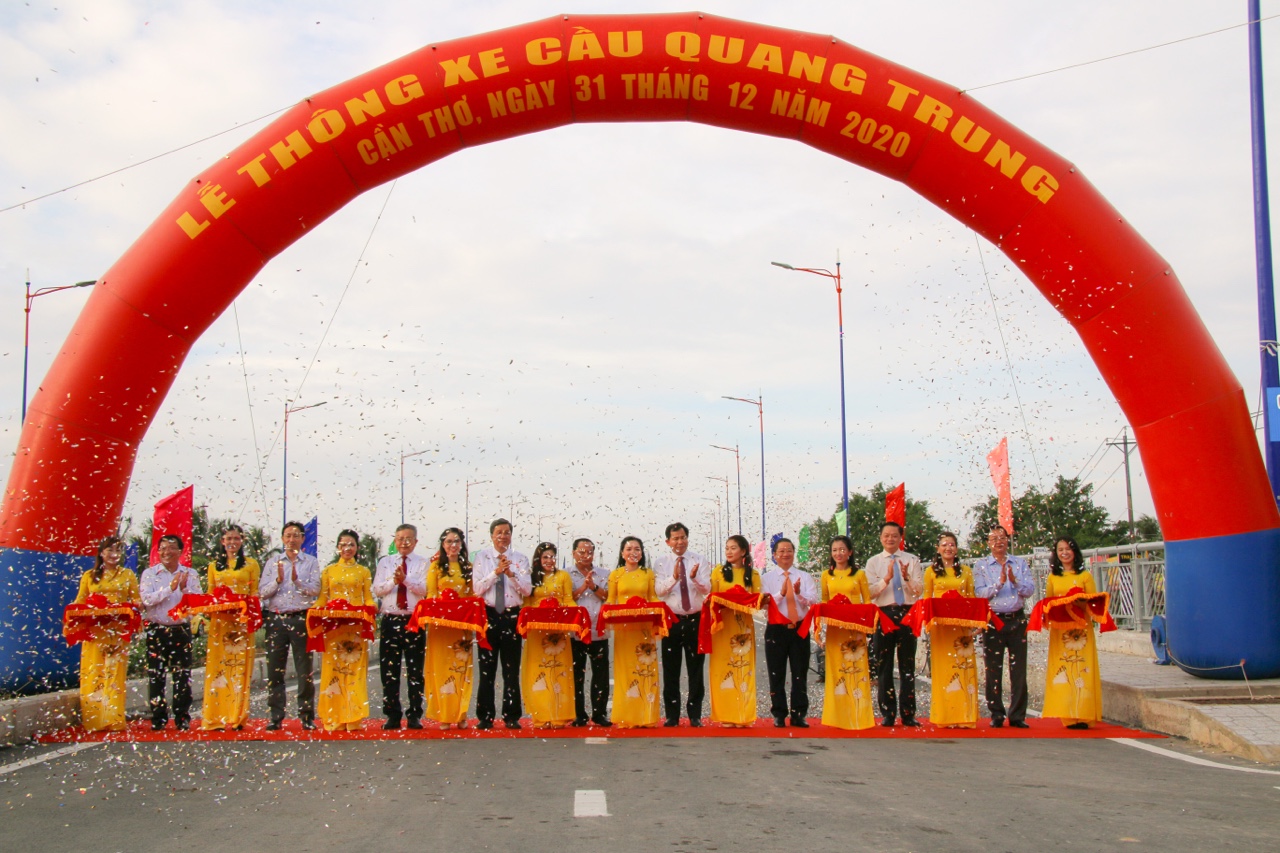 Permanent Vice Chairman of People's Committee - Duong Tan Hien city speaking at the Quang Trung bridge bus opening ceremony.
Speaking at the ceremony, Standing Vice Chairman of the City People's Committee - Duong Tan Hien said: Over the past years, many important traffic works in the city have been invested, upgraded and contributed to an important driving force to promote socio-economic development, step by step fundamentally changing the urban appearance towards increasingly civilized and modern way. Particularly, Quang Trung Bridge work of Can Tho River was built more than 20 years ago, plays an important mission in connecting transport infrastructure, serving socio-economic development of the city. In recent years, along with the speed of urban development of the city, Quang Trung bridge has always fallen into an overload, narrow, potentially high risk of traffic unsafety, especially in rush hours.
Facing the above situation, at the end of November 2017, the city started building Quang Trung Bridge Unit 2, parallel to the existing Quang Trung bridge. The project has a total length of the bridge, leading shifts and paths about 869m, of which the bridge section is 481m long, 11m wide, with a total investment of 219.9 billion VND from ODA. According to the construction design, the Quang Trung Bridge Unit 2 will simultaneously widen the span of Unit 1 and consolidate the existing bridge; installation of lighting and architectural restoration systems for Quang Trung Bridge, access roads on both sides of the bridge. These designs are intended to decorate the Quang Trung Bridge to become the highlight of the southern gateway of the city. In early 2020, Quang Trung Bridge – unit 2 is officially opened for traffic in the joy of city people, contributing to relieve congestion and ensure traffic safety. The city leaders continued to urgently repair and upgrade the old Quang Trung bridge (unit 1) to synchronize with the new one afterwards.

The first convoy officially rolled on the Quang Trung Bridge
Mr. Hien said that after being renovated and upgraded, the old Quang Trung bridge (unit 1) is located parallel to the new Quang Trung bridge (unit 2), forming a spacious and airy Quang Trung bridge raising the width of the bridge deck to 22m with 4 lanes and 2 sidewalks; contribute to strengthening the connectivity of urban traffic between National Highway 1A and central roads, reducing the load of vehicles through the main roads of the city, especially solving traffic congestion at rush hours. In addition, Quang Trung Bridge also plays a role as a lever to promote economic development, attracting more and more investors to the city; and also an opportunity for the city's tourism, trade, service and industry to accelerate, step by step making Can Tho city increasingly civilized, modern, worthy of being a nuclear city in the Mekong Delta in accordance with the spirit of the Politburo's Resolution No. 59-NQ/TW dated on August 5, 2020, "On the construction and development of Can Tho city to 2030 with the vision for 2045”

Quang Trung Bridge contributes to enhancing traffic connectivity between National Highway 1A and the city center routes
At the ceremony, the Standing Vice Chairman of the City People's Committee praised and highly appreciated the active initiative of the ODA Project Management Board and related departments and agencies for gathering resources, promptly removing difficulties, continuous construction, quality assurance for the project to be completed on schedule, meeting the expectations of the Party Committee, the Government and the city people.

Quang Trung Bridge stands out brilliantly at night in the city.
In order for the project to be put into operation and use effectively, the Standing Vice Chairman of the City People's Committee suggested that the agencies assigned to manage and operate should closely coordinate with the local authorities to organize the implementation of traffic work well, effective management, conservation and maintenance of works; in particular, paying special attention to the navigation flow to ensure safety of road and waterway traffic in the process of putting into operation.
Thiên Nhi