Can Tho: Ground breaking for construction of Tran Hoang Na bridge 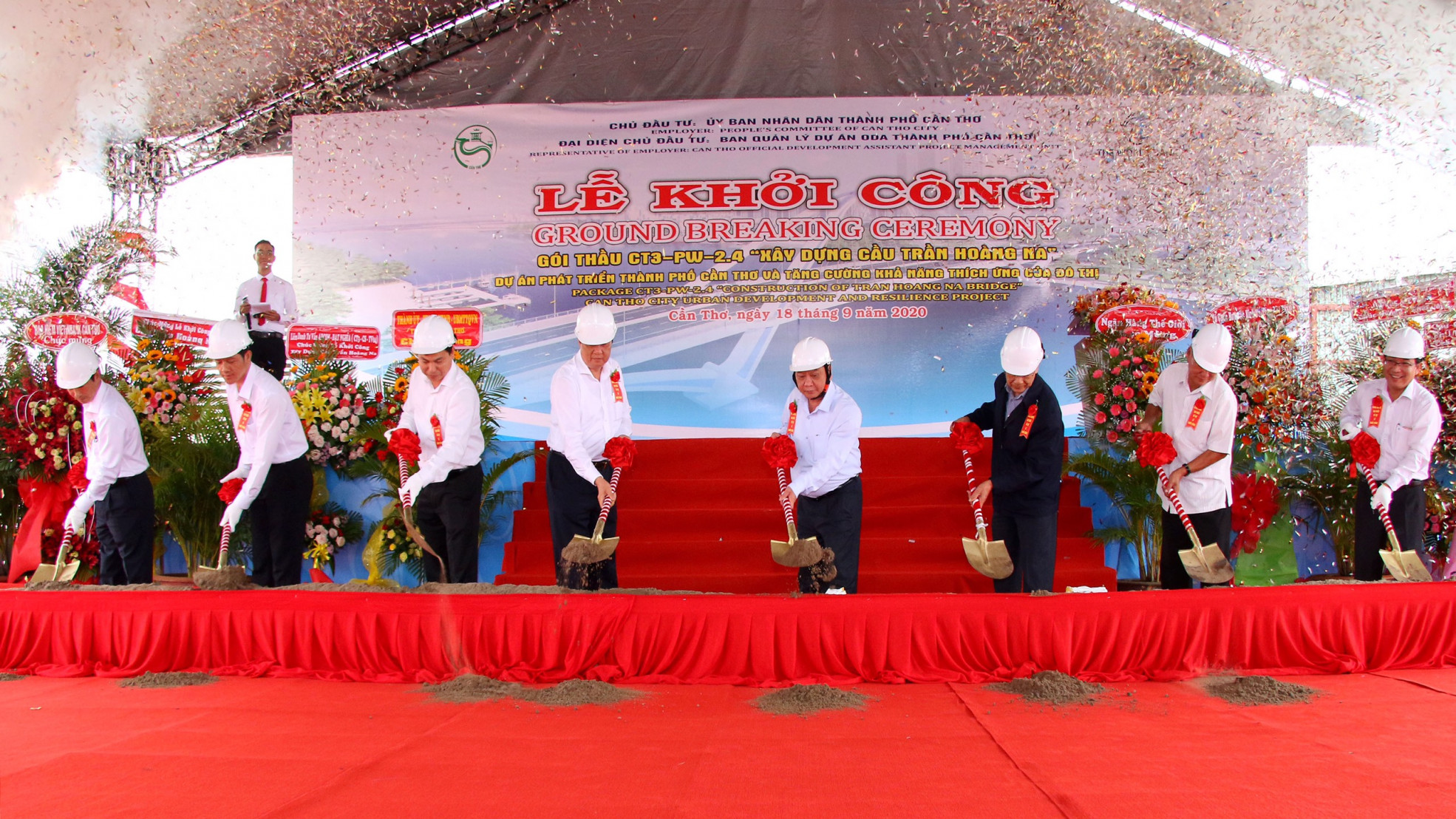 In the morning of September 18, Can Tho People's Committee solemnly held a groundbreaking ceremony for the construction of Tran Hoang Na Bridge project. This is also an event of special social and political significance when the entire Party Committee, authorities and people of the city are striving to emulate achievements to welcome the next 14th Congress of Can Tho Party Committee, term 2020-2025

Designed perspective of Tran Hoang Na Bridge
Tran Hoang Na Bridge was built across the Can Tho River connecting Ninh Kieu district with Cai Rang district - one of the key transport works under the Project for Can Tho Development and urban resilience strengthening.

Representative of Tran Hoang Na Bridge construction unit commits to implement the project strictly in compliance with technical process, absolutely safe.
The Vice Chairman of Can Tho People's Committee expected that after being completed and put into use, Tran Hoang Na Bridge will contribute to solving the task of connecting urban traffic between National Highway 1A and the central roads, reducing load vehicle through main roads of the city and traffic congestion during rush hours. Besides, Tran Hoang Na Bridge also plays a role as a connector, a lever to promote economic development, attracting more and more investors to Can Tho city and the southern provinces of Hau river; It is a beautiful architectural project that creates a highlight for Can Tho city opening up opportunities for the tourism, trade and service industry to accelerate and breakthrough in the future.
At the ceremony, the Vice Chairman of Can Tho People's Committee praised and highly appreciated the efforts of the City ODA Project Management Board and related departments and agencies for project investment preparation and clearance... as well as acknowledging the support and high consensus of the people in actively coordinating with the authorities and investors in site clearance for construction.
For ensuring the sufficiency of the project,  completing on schedule, the leaders of Can Tho city require departments and branches to pay attention and create the most favorable conditions for the construction contractors to fulfill their tasks; At the same time, regularly urge the inspection and control of the construction progress, work quality, closely supervise the project implementation process strictly complying with the technical process, absolutely safe.
“Tran Hoang Na Bridge crosses Can Tho River, this is the national waterway with a very large traffic density, so the construction unit must have a plan to ensure traffic safety and movement of ships. The construction process must strictly comply with the technical process, ensure absolute safety, maintain environmental sanitation, ensure the progress and quality of the project ”- Vice Chairman of Can Tho People's Committee emphasized.

Mr. Le Van Son - Director of the Can Tho ODA Project Management Board gave a speech  at the groundbreaking ceremony.
Giving information about the project, Mr. Le Van Son - Director of the Can Tho ODA Project Management Board said that the Can Tho Development and Urban Resilience strengthening project was approved by the People's Committee of Can Tho in Decision No. 164 / QĐ-UBND dated on 20 January 2016, and adjusted in Decision No. 2596/QĐ-UBND dated on August 15, 2016 and Decision No. 3432/QĐ-UBND dated on December 26, 2016 2018. On July 11, 2016, the Government of Vietnam and the Sponsor - World Bank signed a Financial Agreement for the project with a total investment of VND 7,843 billion.
Package CT3-PW-2.4 "Construction of Tran Hoang Na Bridge" has been approved the contractor selection plan according to Decision No. 337 / QĐ-UBND dated on February 26, 2020; approval of construction design and cost estimates according to Decision No. 433/ QĐ-UBND dated on March 6, 2020 with the following main specifications: bridge cross section with 4 lanes, width section for vehicle running 4 x3.5m; bridge width at main span 23m, total width of bridge at border span 30.5m. The main bridge is designed as a middle arch bridge, consisting of 3 steel structural spans according to the 49.25 + 150 + 49.25m span diagram, Super T beam guide bridge, and prestressed reinforced concrete. Total length of the bridge is 586.9m ... The execution time of the package is 36 months, construction cost estimate is 847 billion dong from ODA. The winning contractor is the Joint Venture of Traffic Construction Corporation 1, JSC – 14 Bridge Joint Stock Company, with the contract value of more than 791.4 billion VND, the contract execution time is according to the bid, equivalent to 34.4 months; However, in order to speed up the completion of the project, the ODA Project Management Board negotiated with the contractor to shorten the project implementation progress with the completion time after 22 months

Delegates perform the groundbreaking ceremony to build Tran Hoang Na bridge.
According to the Director of the Can Tho ODA Project Management Board, the construction of Tran Hoang Na bridge contributes to speeding up the progress of project implementation, project disbursement and investment capital disbursement of the city; The completion of construction of Tran Hoang Na bridge will contribute to solving urban traffic connection between National Highway 1A and the central roads, reducing vehicle traffic load for main roads of the city, contributing to reducing traffic congestion, promoting economic development of the city.
Thanh Bình